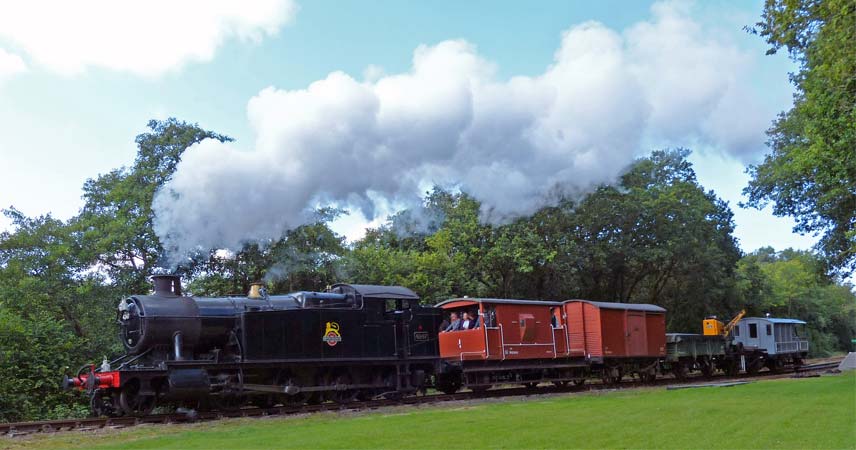 Nanny Pat’s days out: full steam ahead on the Bodmin & Wenford Railway

The Bodmin & Wenford Railway ticket office can be found on the platform of the old Bodmin General Station on the B3268 Bodmin to Lostwithiel road. It is Cornwall’s only standard gauge railway still operated by steam locomotives and is manned almost entirely by volunteers who share a passion for preserving the line and rolling stock to illustrate the glory of a bygone era.

The history of the railways in Cornwall is quite complex with a mixture of uses and gauges, difficult to fathom as a lay person! The station at Bodmin was linked to Wadebridge in 1831 – one of the first railways in the world carrying sand from the coast to farmers to spread on and ‘sweeten’ their acidic soils, a process still used today. The Great Western Railway was being forged by Brunel along the south coast and a line was built to link to it from Bodmin General in 1887. Where the two joined, a new station was built to be known as Bodmin Parkway. This is the route that the steam trains now take between Boscarne Junction and Bodmin Parkway and has been operated by the Bodmin Railway Preservation Society since 1989 following its closure by British Rail in 1967. 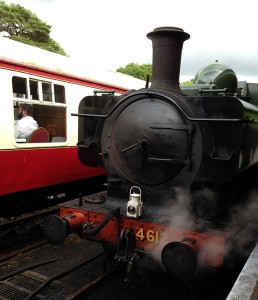 The railway runs all the year round but operates different timetables on different days. You will need to plan your day around these departure times which can be found at www.bodminrailway.co.uk. If you want to complete the whole track in one day you’ll need to leave early. Parking is free in the station yard but it fills up quickly. Alternative parking is available at Victoria Square, 400 yards up the road, but be prepared to put approx £5 in the meter here.

I had spotted on the website that they had spaces to carry bikes, so I decided to combine train rides and cycling in one day out. We opted for an 11am start and took a train to Bodmin Parkway, gently chuffing down the hill past Colesloggett Halt and the Glynn Valley. It brought back childhood memories for me as I had taken a steam train to school every day. The beautiful old compartments had sepia pictures of UK landmarks and long corridors with windows which opened by letting down a leather strap, and if you leant out of the window you got coal smuts in your face. It took me right back to those bygone days. 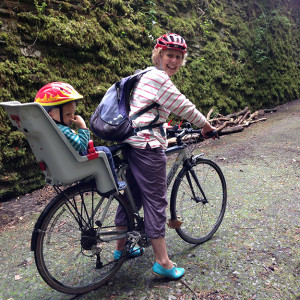 The conductor came along and punched our tickets and before long we had arrived at Bodmin Parkway. I unloaded the bike and had to ask for a member of station staff to unlock the gates and let me cross the line rather than heaving it over the bridge. This even required a phone call to HQ to OK it!

I jumped Sam on to his bike seat and we were off for a cycle ride along the Carriage Drive, built specially by Lord Robartes to enable his family to get to and fro from the station to Lanhydrock House. I had made a packed lunch and we found a peaceful spot alongside Station Pond to have our picnic – yet again we had the place all to ourselves.

We then crossed Respryn Bridge and cycled along the River Fowey into the woods. You can continue downstream to Lostwithiel and Restormel Castle but I did a circle back up to the house entrance and back, just using up our window between trains. We had an ice cream in the station café before crossing back to catch our return train. 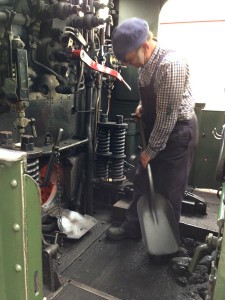 When we reached the station we had a peep in the steam engine where the driver and fireman work. The furnace was open and glowing red – much like the fireman’s face. He had been shoveling coal as fast as he could to get us back up the hill! All the staff were super friendly and obviously loved their jobs. They spent time explaining things to Sam and he was fascinated.

We left Boscarne Junction and the Camel Trail cycling for another day. Nanny Pat was pooped!

You can take bikes and trailers on the train for free. Space is limited but they’ll always try and fit your bike in. Dogs are welcome on board (except in the bar and buffet car) and travel free on standard daytime service trains.

For a taste of what it’s like to take a trip on the Bodmin & Wenford Railway, take a look at this short video.