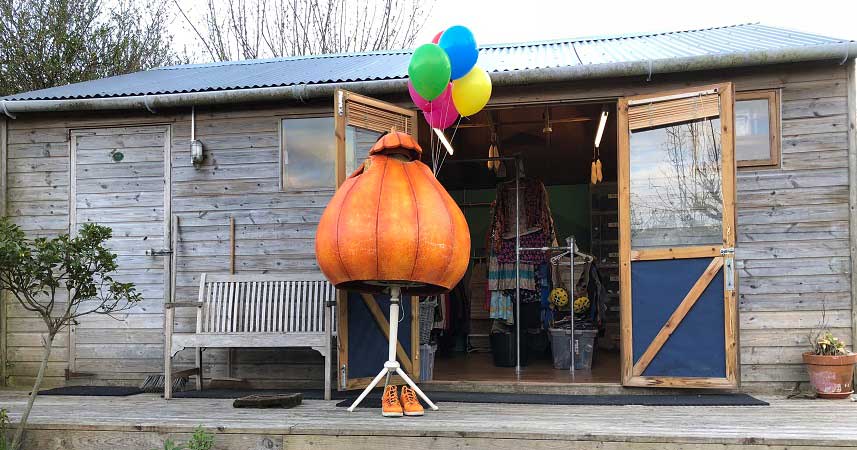 I am a great fan and staunch supporter of Kneehigh theatre and contribute a sum of money each year as a ‘Friend’ to help them with their Rambles and Pass it On projects to enable everyone to have a chance to experience live theatre.

I was very excited to receive an invitation to meet some of the team at their headquarters and spiritual home based in  beautiful old stone barns owned by the National Trust on the cliffs at Gorran Haven. 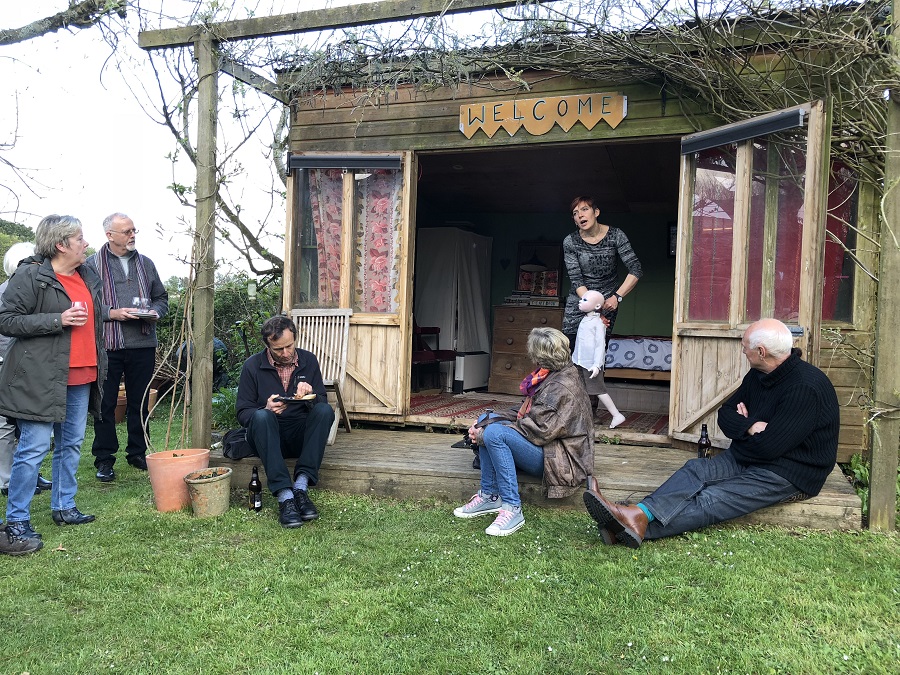 The invitation promised a glimpse of the costumes and props from productions I have seen over the years as well as a buffet and wine. There was also a chance to see a preview of their new show coming up at the Asylum (based at the Lost Gardens of Heligan) this summer, ‘The Dancing Frog’.

Wild horses couldn’t hold me back as Kneehigh can do no wrong in my eyes. For those of you who are new to my blog I am repeating an email I sent them in 2010 after watching ‘Hansel and Gretel’ at Heligan.

To all of you

I am writing this at midnight after returning home from watching Hansel and Gretel at Heligan. My mind is too alive to sleep and I am listening to your CD. Wow, wow, wow, yet again another superb performance a helping of Kneehigh’s magic that moves, inspires and sets my soul alight.

I have been following you all since 1980 (ish) and remember being wowed over by your flames and Mike Shepherd’s strimmer motorbike in your performance of Tregeagle. You captured me then and I have been a staunch supporter ever since and have hardly missed a show. I cannot convey the effect your performances have on me, the power you have to move the spirit, an earthiness which connects to the landscape and essence of Cornwall, the way you remind me of the important things in life – history, family, children, love and above all laughter. I have seen your dark side, your madness, your incredible creativity, your joy, your stagecraft and all of them have enriched my life. Most of my friends are Kneehigh converts (some of them came along just to shut me up and are now firmly hooked!) I just buy 10 tickets now and know various friends will come along.

I can’t wait to see the Asylum in the summer. Please carry on being inspirational and irreverent in a world seemingly hell-bent on reducing us all to mediocrity and convention.

You are a breath of fresh air.

Luckily, we had a beautiful evening and the waft of wood smoke from the barbecue greeted us as we walked across the lawn. The door to the props shed was open and the vivid orange costume worn by Mike Shepherd (Kneehigh’s founder) in their production of ‘Midnight Pumpkin’ beckoned us in.

I was very impressed with the tidiness and labelling of the costumes and accessories and I recognised several of the outfits. The props shed was equally inviting with carefully crafted puppets, birds, baskets, suitcases, masks and all manner of things which could be used again in future productions. 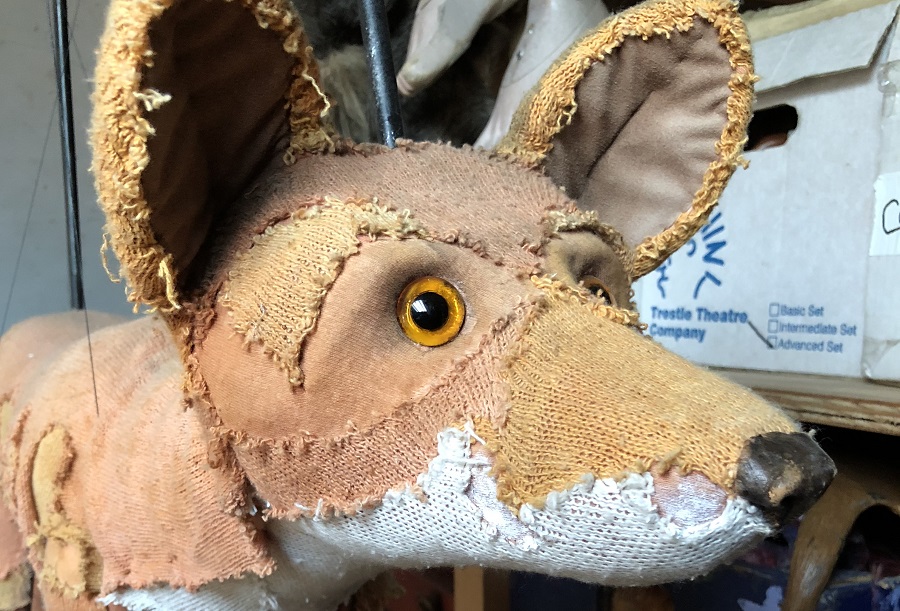 When the actors are in residence they start their day with a walk on the cliffs and an exercise or yoga session to bring calm into their minds ready for their creative outpouring. It is a stunning view over Vault beach and hardly a building in sight, just pure, unadulterated nature. Bliss! 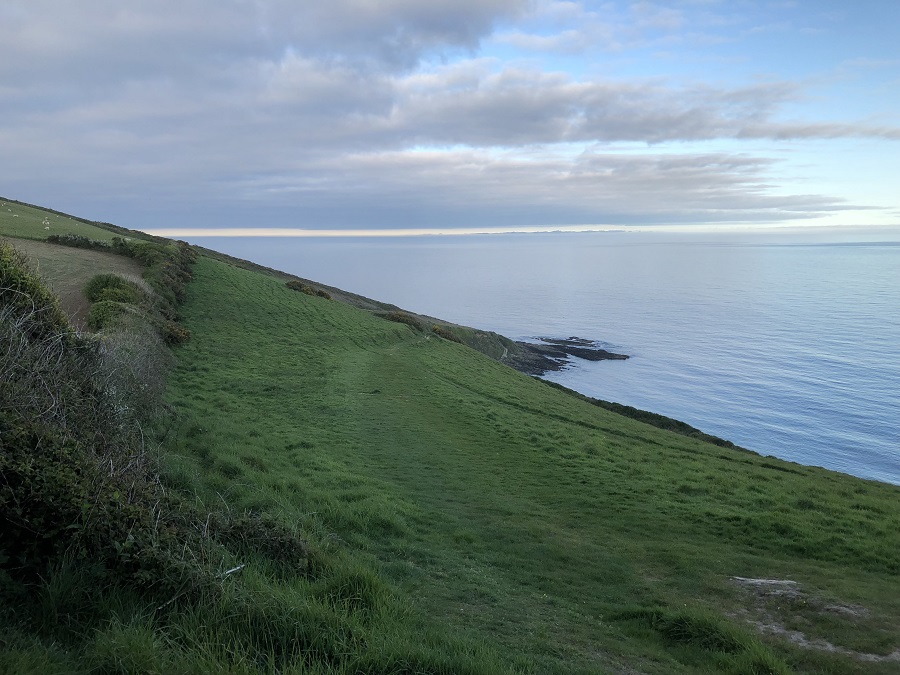 After the walk we did a bit of socialising and helped ourselves to some fantastic tasty dishes prepared by Kris from the Kings Arms in Mevagissey. The evening finished with a performance of ‘The Dancing Frog’. In true Kneehigh style, the most minimal props set the scene and just three performers whizzed through space and time, playing a host of musical instruments, managing a load of costume (and sex) changes, accompanied by the most captivating and charming green frog whose dancing is unrivalled in the puppet world! 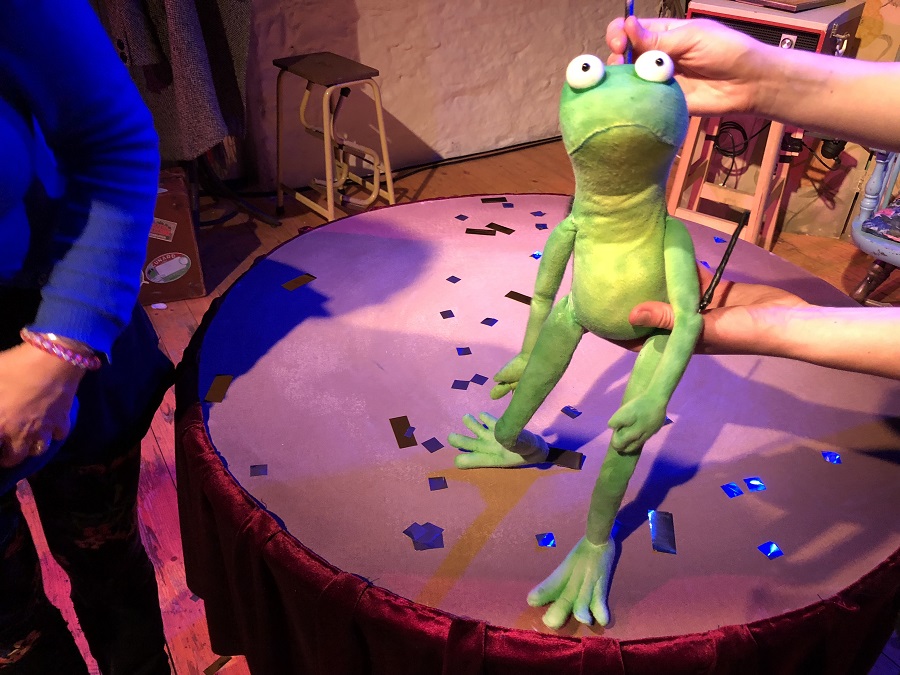 From the moment the actors came on, everyone was entranced and smiling – no sneaky peeks and dabbling on mobile phones, just riveted attention from grannies and toddlers alike. It’s the antidote to screen time and for me it is ‘proper’ live theatre where the audience participates by using their own imagination. 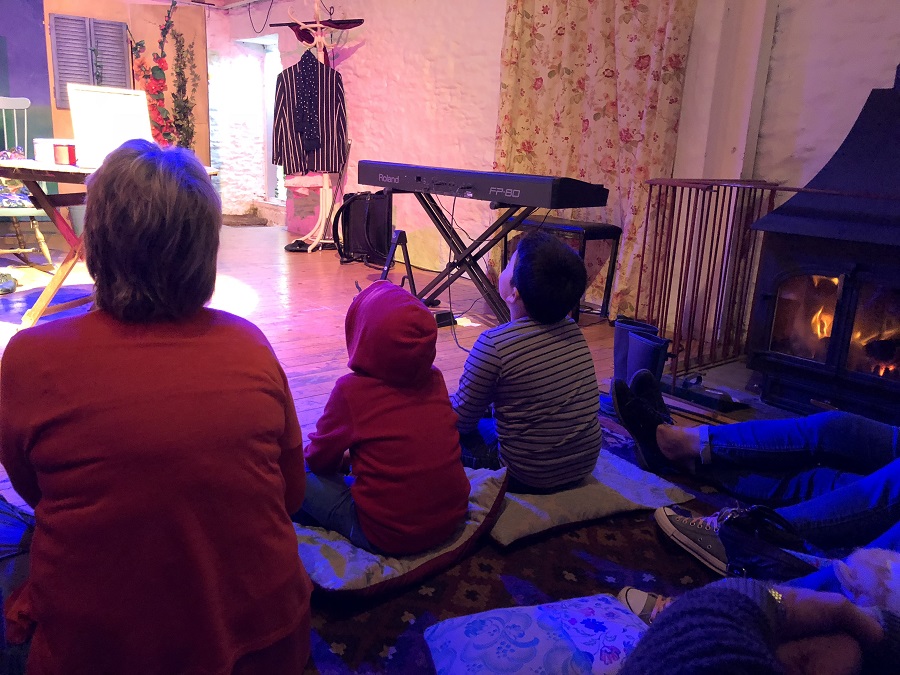 After a year off in 2017, the Kneehigh Asylum tent will be back at the Lost Gardens of Heligan this summer in August and September with a rerun of the most heart rending story about a duck called FUP, the cutest little Dancing Frog and a new production UBU Karaoke, described as a roof-raising stark-raving sing-along satire. Hope to see you there as I am certainly going to all three with whoever I can drag along!

We’re lucky enough to have a range of fantastic theatre companies based in Cornwall. There’s a wide variety of performances happening across Cornwall throughout the summer and into September. Some performances will be very popular, so it’s worth booking early to make sure you don’t miss out.