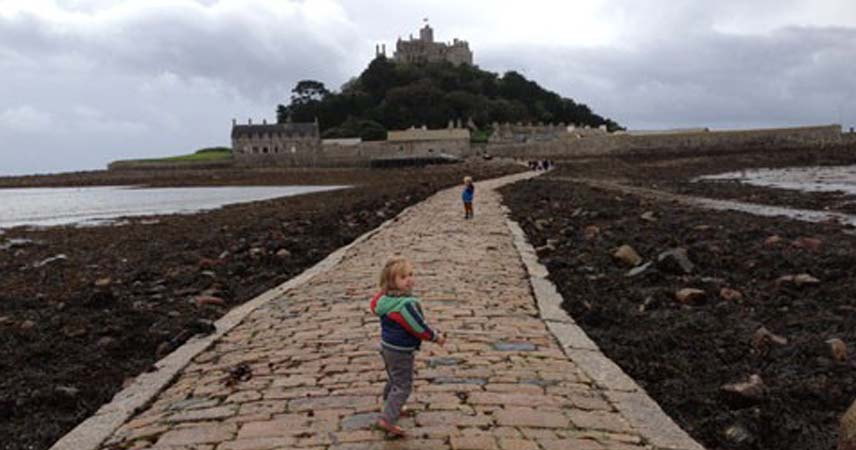 On Nanny Pat’s day out, Wilf and Megan visited St Michael’s Mount when the tide was out, walking along the cobbled pathway or ‘giant’s causeway’ across the seabed. 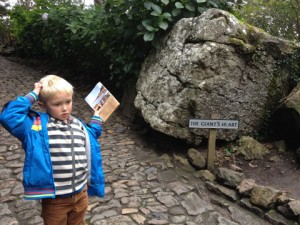 As they climbed up to the castle, they passed the large granite heart of Cormoran the giant.

They then heard about Cormoran in great detail from the National Trust volunteers, who gave them her undivided attention for ages to tell them the story.

According to legend, the Mount was built by a giant called Cormoran who would wade ashore to steal livestock from local farmers. A reward was offered in return for killing the giant and a young boy called Jack came forward. One night, when Cormoran was asleep, Jack crept over to the Mount and dug a deep pit halfway up one side. In the morning, Jack blew on his horn to wake the giant, who came running down the the Mount but blinded by the sun fell into the pit. Quickly burying the giant, Jack killed Cormoran and from then onwards was known as Jack the Giant Killer. 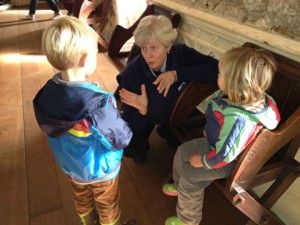 St Michael’s Mount is a jewel in Cornwall’s crown and each year thousands of visitors flock to this ancient landmark to marvel at its beauty. Just off the South Cornish coast by Marazion, near Penzance, it takes about 45 minutes to get to from Bosinver.

The buildings date back to the 12th century when there was first a priory, then a fortress, a place of pilgrimage and finally a private home coming into the ownership of the St Aubyn family in 1659.

In 1954 the St Aubyn family went into partnership with the National Trust and the castle and its grounds were opened to the public.

It is possible to take a tour through the fascinating early rooms, an armoury, a rococo Gothic drawing room and, at the highest point, a 14th-century church. 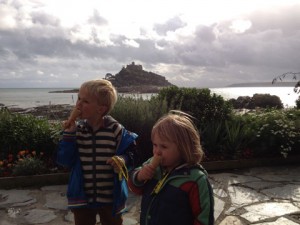 Along with the castle where the St Aubyns still live, the Mount is home to several residents in its village, has its own church, ancient harbour and beautiful gardens full of exotic plants.

There are also a couple of gift shops and restaurants where Wilf and Megan were able to have an ice cream.

On the way back, Wilf and Megan wrote numbers in the sand and finally watched the seabed disappear as the tide came in and the island was once more cut-off from the mainland. 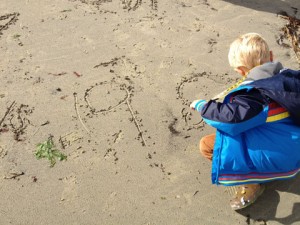 “This was a great trip. Wilf and Megan not only gained a sticker for their 50 things to do before you’re 11 ¾ by visiting an island as part of The National Trust great get outdoors campaign but they were rewarded with a delicious ice cream too.”

“Also, having just started at school, Wilf was able to practise writing his numbers in the sand before the tide came in and washed them all away again.”