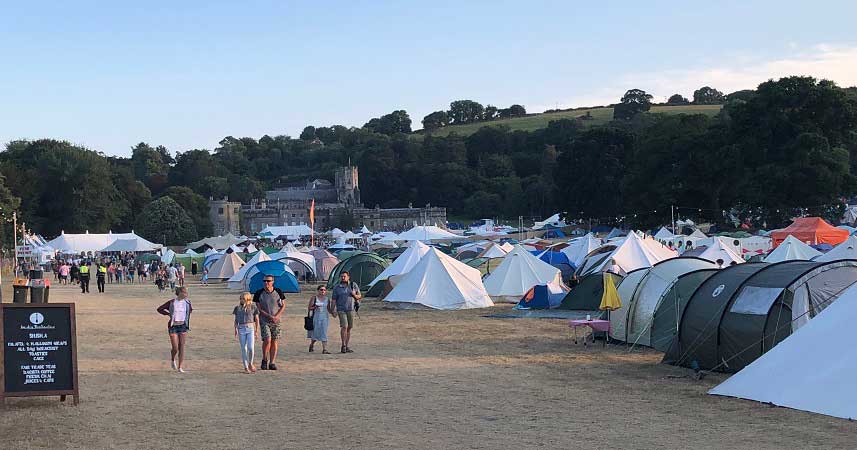 I just love Port Eliot Festival. It is like no other festival you will ever attend. Encompassing the whole of the Port Eliot Estate’s 6000 acres at St Germans with hardly a square inch out of bounds, you are welcomed in to a pop up village of tents, yurts, teepees and camper vans, home to a most eclectic bunch of humankind aged from 0-90. 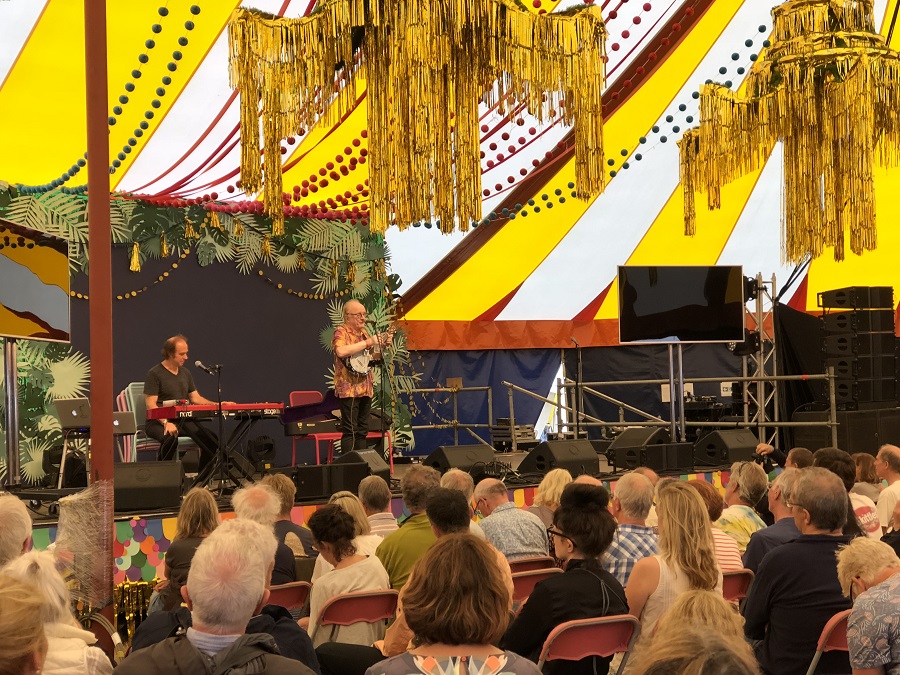 This is one of the most beautiful corners of Cornwall. Its rolling parkland gently slopes to the shores of the River Tiddy which empties and fills with the tide and is a constant source of entertainment for children as they squelch and slide on its muddy banks or raft race on the river. Shady groves, a hidden maze, walled gardens and sunny picnic spots abound. 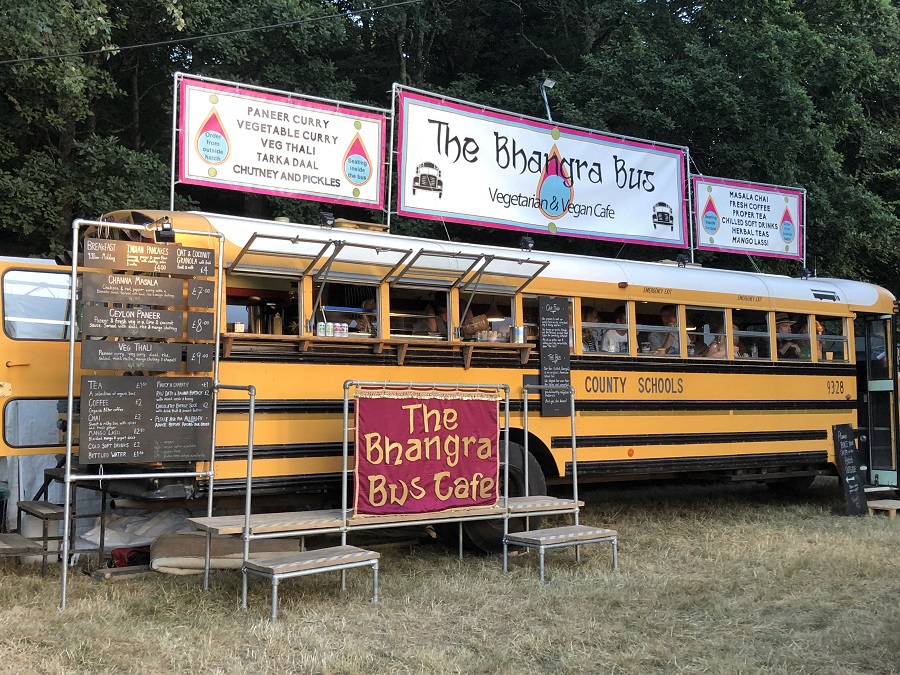 The house has been inhabited for over 1000 years by the same family, believed to be the oldest continually inhabited dwelling in the UK. You are allowed in to parts of it too! Although there are thousands of people wandering around, it never feels crowded except for the jostling and dancing in the music tents which is an essential part of creating the vibe for the performers.

This festival has an unmatchable collection of artists, musicians, writers, comedians, thinkers, makers, poets, chefs and damn interesting people with stories to tell. The curators need a medal for pulling it off with relatively few hitches. My only beef is queuing for 90 minutes to book courses and workshops for the day, then having to do it all over again for tomorrow! Workshops, talks, performances, music and cookery demonstrations are happening simultaneously, so deciding which to see can be tricky.

I like to wander around and have often found the things I enjoyed the most were just a chance pop in because I happened to be there. There is just so much to enjoy if you go with the flow, much like the punters did at the legendary Elephant Fayre festival here some 30 years ago.

Food is an important part of a festival and alongside cookery demonstrations and master classes from famous and talented chefs, there are many vans offering fantastic street food, such as the Bhangra Bus Café, serving top quality Indian vegetarian dishes. There were several other tents and vans serving authentic wines, gin and local beer. 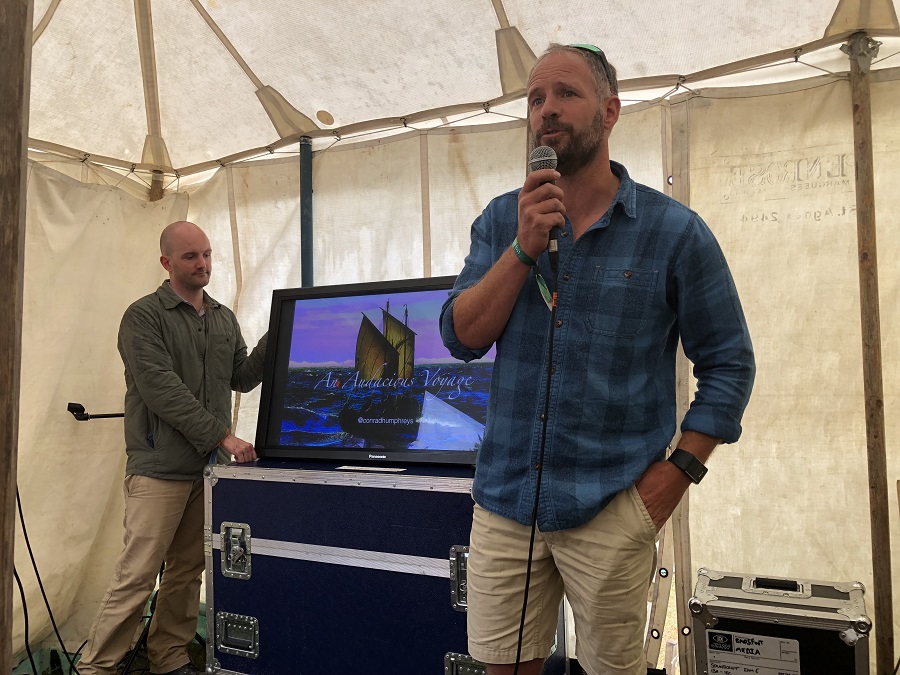 My previous two visits to the festival were with my grandchildren. As they were away this year I took the opportunity to sneak off in my camper van and enjoy a selfish couple of days pleasing myself and not having to spend my time in the forest school and Wildlings area then having to collapse exhausted into bed at 9pm!

I enjoyed wandering around soaking up the atmosphere and being enchanted by rich experiences: listening to amazing poetry read by my superhero Brian Patten of the Liverpool Poets; being challenged by a debate on the effect of ‘Me Too’ by Helen Pankhurst, great granddaughter of the famous Suffragette, Emily Pankhurst; whisked away by a tale of a voyage recreating Captain Bligh’s 4000 mile journey cast adrift on an open boat by Conrad Humphreys; and learning to make wild cocktails with local forager and brewer, Stuart Woodman.

Evenings were taken up by listening to bands in many venues inside and outside across the site and one of the highlights was listening to local band ‘Wurlitza’ accompanying a 1929 silent film as musicians would have long before the Talkies!

I filled my boots with only a taste of what was on offer. Port Eliot is a feast for the senses and offers the most diverse combination of outlandish performances and costume, a place where families can relax and children are safe to run free, a place for fashionistas and music lovers, a place for picnics and Prosecco. It’s a place for anyone and offers something for everyone. Why don’t you give it a try next year? 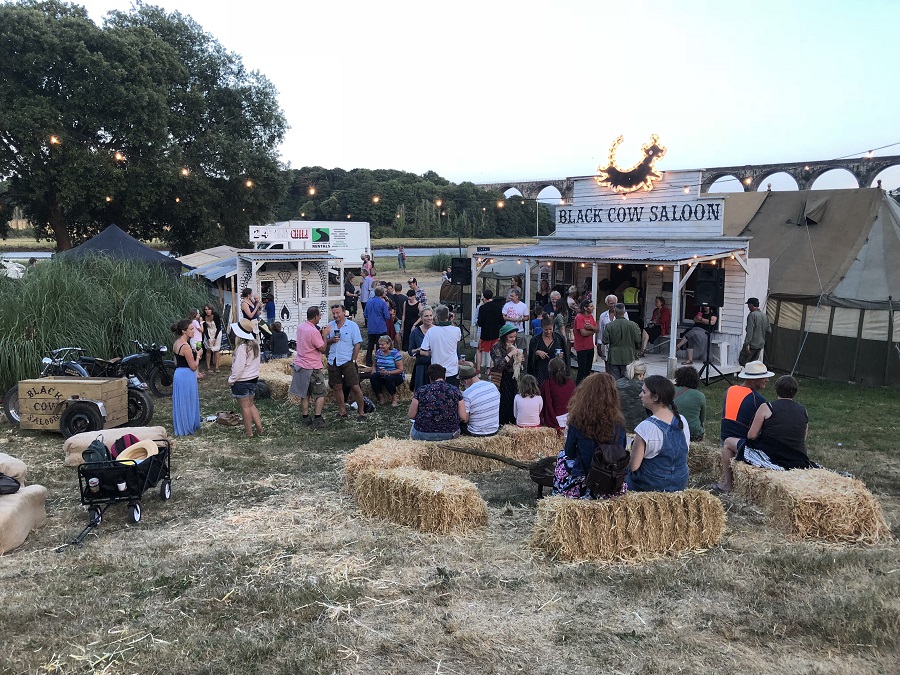 Port Eliot is located in the village of St Germans on the Rame Peninsula in South East Cornwall. The festival usually takes places during the last weekend of July each year. Weekend tickets and day tickets are available – see the festival website for more information.

Looking for more great events in Cornwall this summer? Find out about outdoor theatre performances in Cornwall >